Summary
Summary
The brief was to design a dance studio for the charity 'Workshop & Artists Studio Provision Scotland' (WASPS) through the University of Dundee, which will offer affordable spaces to artists and performers. The initial brief included four dance studios, a mixed use art space, and a café on the River Leith in Edinburgh, Scotland. The proposal replaces a partially derelict theatre with a new community hub. The site is located within a band of low rise residential homes situated between the city mall and high street. The connection to the river was of central importance if not a defining feature.
Location
200-210 Great Junction St, Leith, Edinburgh, Scotland
Acknowledgement
Client
Date
Mar 2017
Creator
Callum O'Connor
Team
No items found.
No items found.
,
No items found.
Additional Content
Share
Proposal
Excerpt

The client organization, Wasps Studios is a non-profit group that provides affordable studio/ workspace and accommodation for around 800 visual artists, craft makers, creative industries and cultural organizations throughout the UK. They have had a presence in Scotland since 1980, running facilities at 17 sites, and provide an important role in supporting artists and arts based charities that might otherwise struggle to emerge.

Wasps Studios is seeking to support the development of performing artists in Scotland. They propose a new centre on the banks of the Water of Leith which will include a central performance & cross art collaboration space, as well as four general dance studios, and supporting / admin service areas. The centre will also include a reception and café with an associated gallery area that Wasps based artists from across the UK may use to exhibit and sell their work. The circulation will offer additional social space, with shared areas for breakout and warm up / rehearsal activities. The brief was later amended to include a theatre for both economic benefits and as an amenity for performers similar to the DCA, Dundee.

The site is located on the south end of Great Junction Street Bridge, Edinburgh. The site was initially occupied by a derelict theatre, which was partially in use as a church. Although the site was originally only accessible at street level, there was an opportunity to step down to meet the river, providing an opportunity for space by the bank. The brief also required an external performance area that responded to the specific characteristics and constraints of the site.

The box office/ lobby coupled with the gallery area acts as the main arrival space within the building. A central mixed use space opens up from the lobby facing towards the river. The fixed studios rise above this double height volume offering an unobstructed connection through the building's heart allowing for easy navigation, access to light, ventilation, and showcasing the creative performances. The mixed use area has an expansive glazing system which opens up to the river and the rest of Leith. The periphery walls on the upper level are clad with Okalux which scatters the light, offering even and consistent lighting, and privacy. The central space could be used as a café, additional gallery space, informal events space, ceilidhs, a venue for music artists, elements of the fringe or somewhere to relax and socialise on the summer afternoons with the glazing opening out to the deck. The deck would also offer a second point of circulation with a new bridge connecting over the river directly to Leith Walk.

The new theatre is constructed from load bearing walls with story deep trusses achieving an impressive 30 meter span. This also gives way to a maintenance deck within the truss structure. The structure for the rest of the building sits on a 14-meter column grid combined with waffle slabs accomplishing unobstructed dance studios and mixed-use spaces. The structure system adapts on the upper story, utilizing the same trusses technique creating a façade free of columns on the ground level offering an unobstructed connection between the central space and deck whilst hanging a 30 meter long retractable glazing system. This piece of engineering is also reminiscent of Leith’s industrial past and the retired ‘cantilever swing bridges’ which sit further down the river. This gesture also merges the multiple construction methods which may otherwise remain concealed.

The materiality is integral to the building's function and ventilation system. From early drafts, we had decided on a double skin made of Okalux in order to deliver the optimal light conditions for dancers and eliminate glare. The material reads as both solid and transparent, partially dependent on the time of day. After dark, the building is illuminated from within and reads as an ethereal solid. This is then contrasted by the cladding of the theatre volume with a rugged and versatile Corten steel. This appears far more industrial and textured in contrast to the smooth polished glazing of the Okalux. The Corten as a material also relates back to the context and history of the surrounding area. It draws inspiration from the rusted ships and warehouses built to service the dock highlighting the nautical themes of the site and wider city. The materials are also representative of the two spaces. One, the darker single fixed volume. The other, more fluid in its composition. The volumes come together to create a contemporary building through its expressive materiality, detailing and technology.

The double skin allows for sustainable ventilation methods with the addition of transparent photovoltaic adhered to its exterior face. The ventilation system works in conjunction with a mechanical system that operates through displacement of exhausted air providing consistent and complete air cycles, essential for those engaging in physical exercise. The mechanical ventilation system is powered by an onsite heat pump for greater efficiency.

A sustainable building should not only offset its energy consumption but aim to provide energy for the community. Shifting from carbon neutral to carbon positive.

‍Photovoltaic panels are implemented on the unoccupied roof surface with 121 2x2 meter panels plus additional area for maintenance pathways. The roof also harnesses wind energy through a series of miniature turbines concealed from view at street level. The south west façade utilizes transparent photovoltaic technology woven into the skin making use of an untapped resource. These considerations should generate a considerable level of energy for the building’s day to day operations while supplying additional power to the grid.

Built with a hydraulic system the wind turbines can drop below the parapet disappearing from sight during events or during undesirable weather conditions. Each turbine, only a meter in diameter, is still efficient at creating adequate power. This configuration allows the turbines to be spread across the roof avoiding any serious conflict with PVC panels, only casting shade when weather conditions are ideal.

The water source heat pump offers a sustainable and consistent energy solution all year round. Energy from the river is extracted through a series of underwater coils which can extract low grade heat or transfer excess heat. This exchange keeps the building at a constant temperature throughout the year. This baseline combats the seasonal shifts reducing some strains on the mechanical heating and ventilation systems.

The ventilation system is controlled mechanically in order to meet efficiency goals with natural ventilation drawn through ducts in the skin. The double skin features vents which can be controlled mechanically, opening and closing based on the air temperature and quality. These ducts act as chimneys with a temperature difference occurring between the top and the bottom of the cavity through solar gain. Negative pressure is created drawing fresh air through the building. The wind forces also contribute to this negative air pressure increasing the efficiency of the system. The building's mechanical intake and extract vents are situated within the service wall to the back of the site. The heat extractors and treatment units are stored at basement level under the auditorium / theatre. The treated air then passes through the central core before being distributed throughout the building. The fresh air then enters the spaces at low level with the extract vents located behind the perforated ceiling panels. This causes displacement of air offering a higher quality of ventilation. 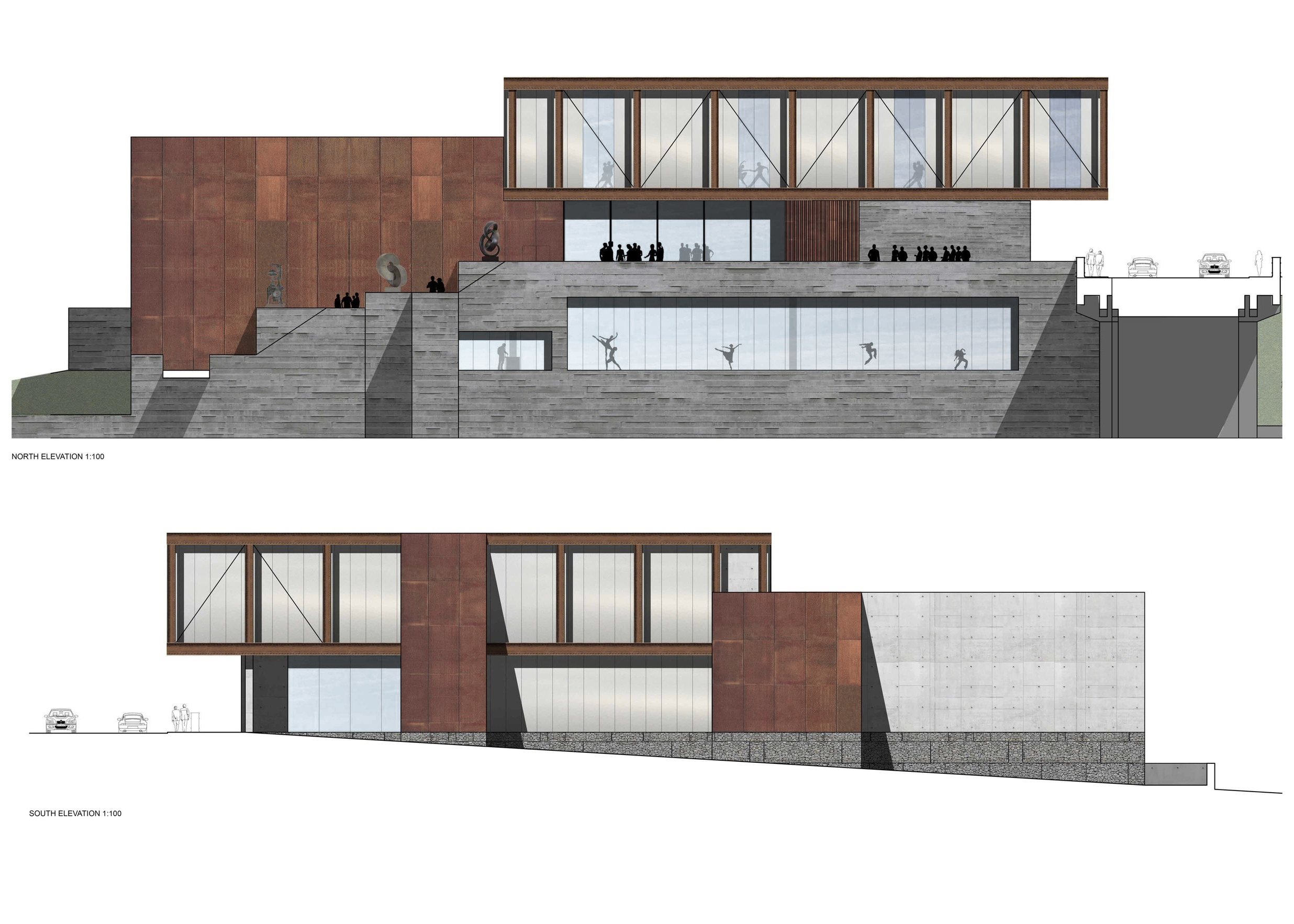 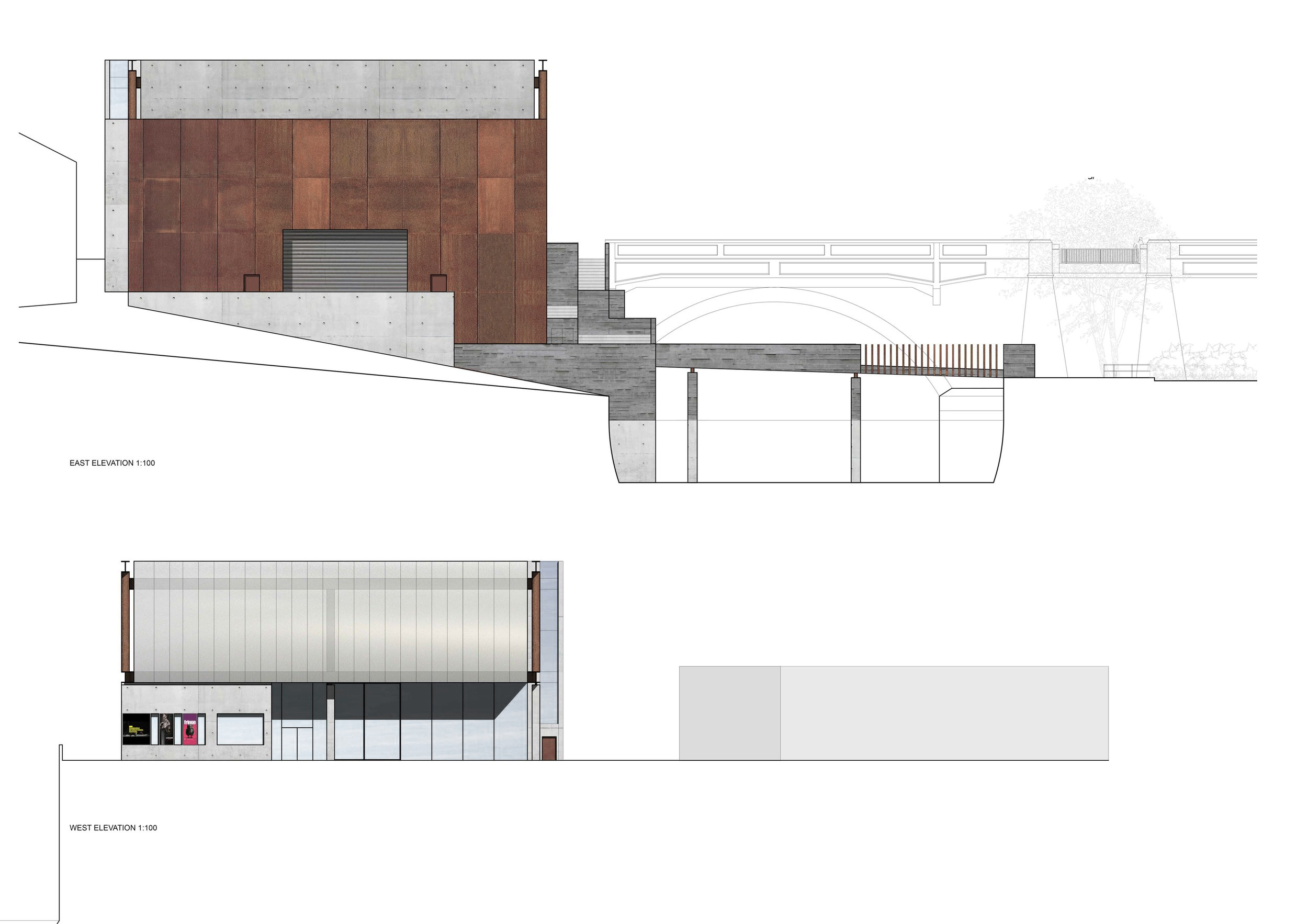 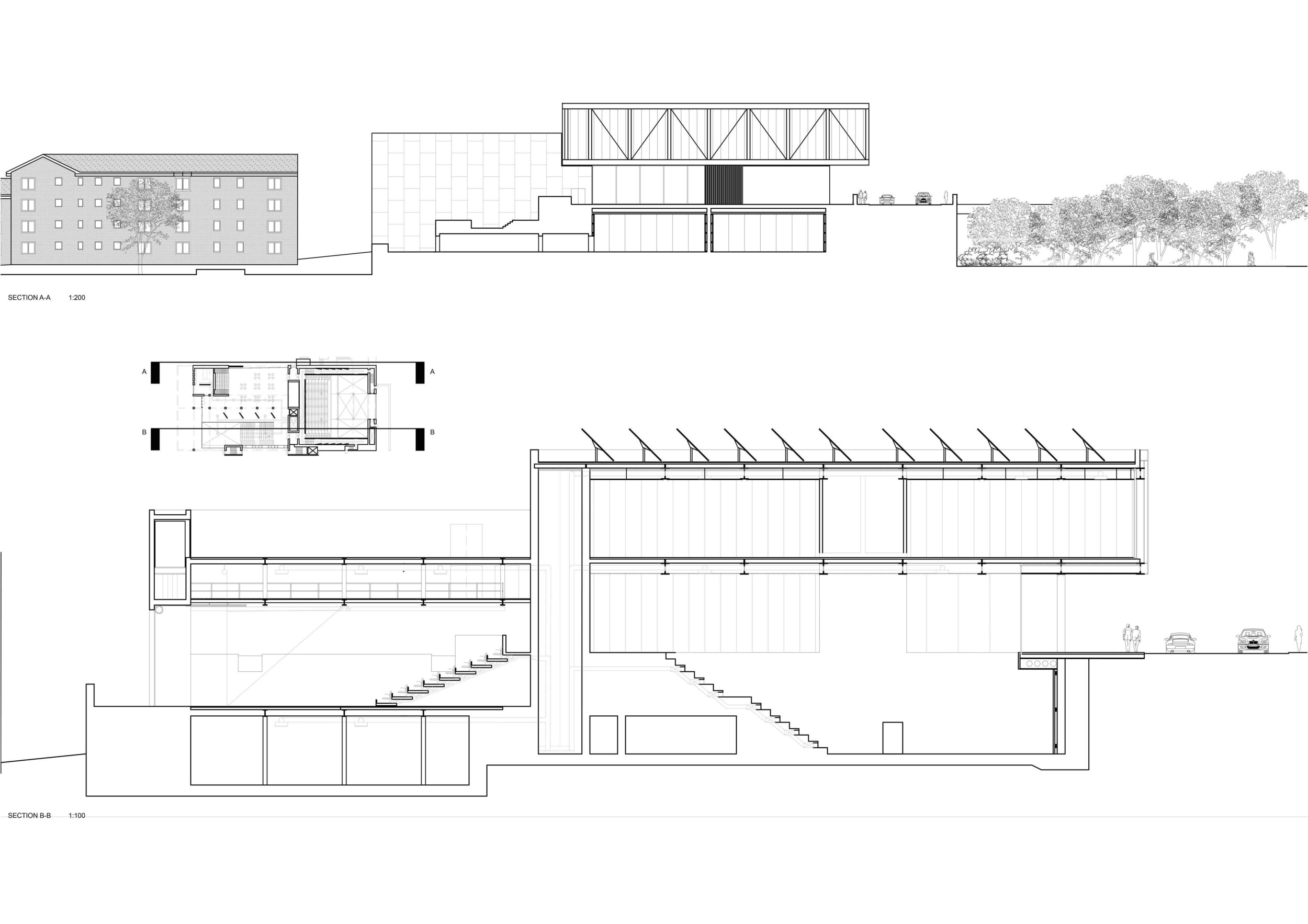 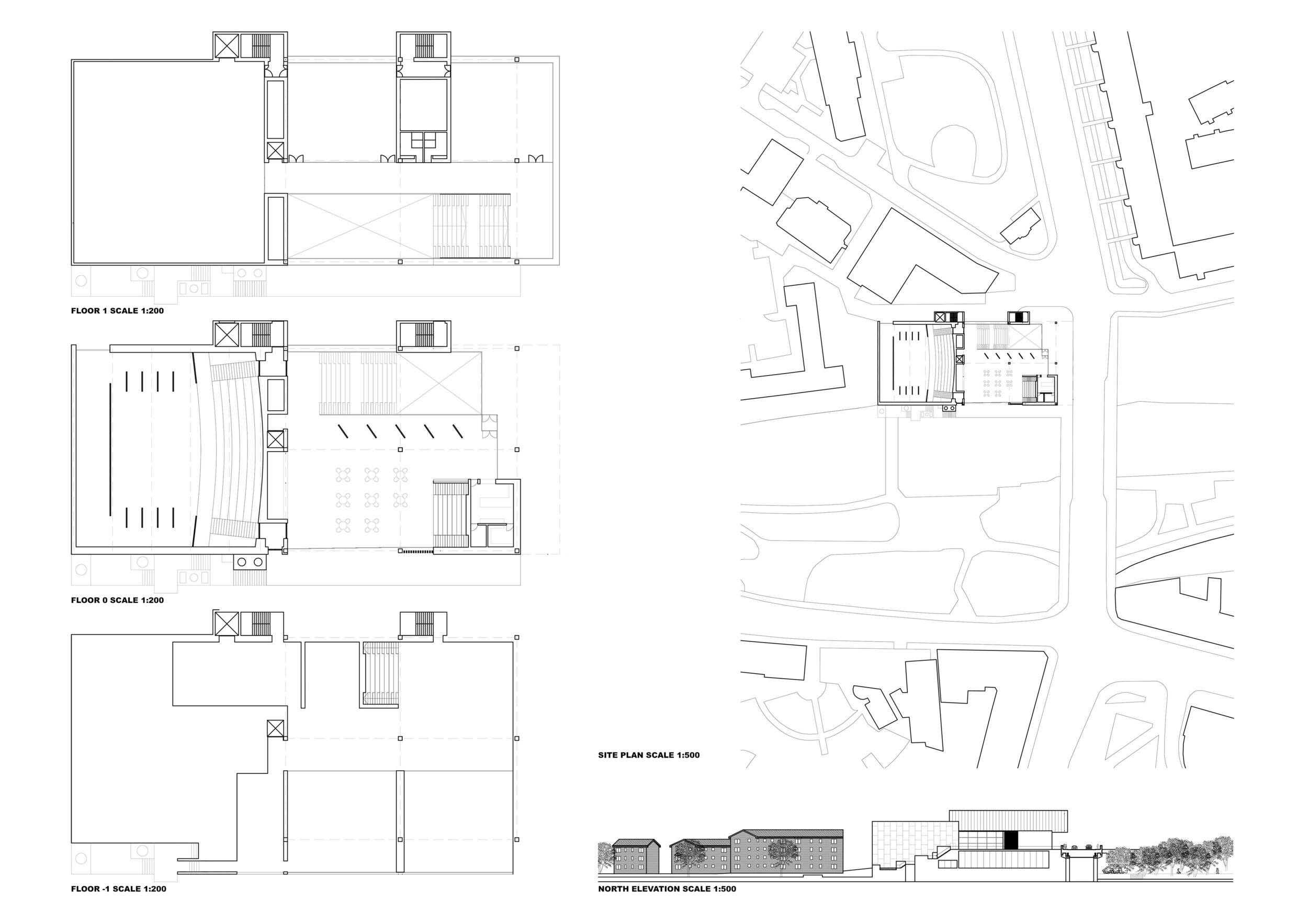 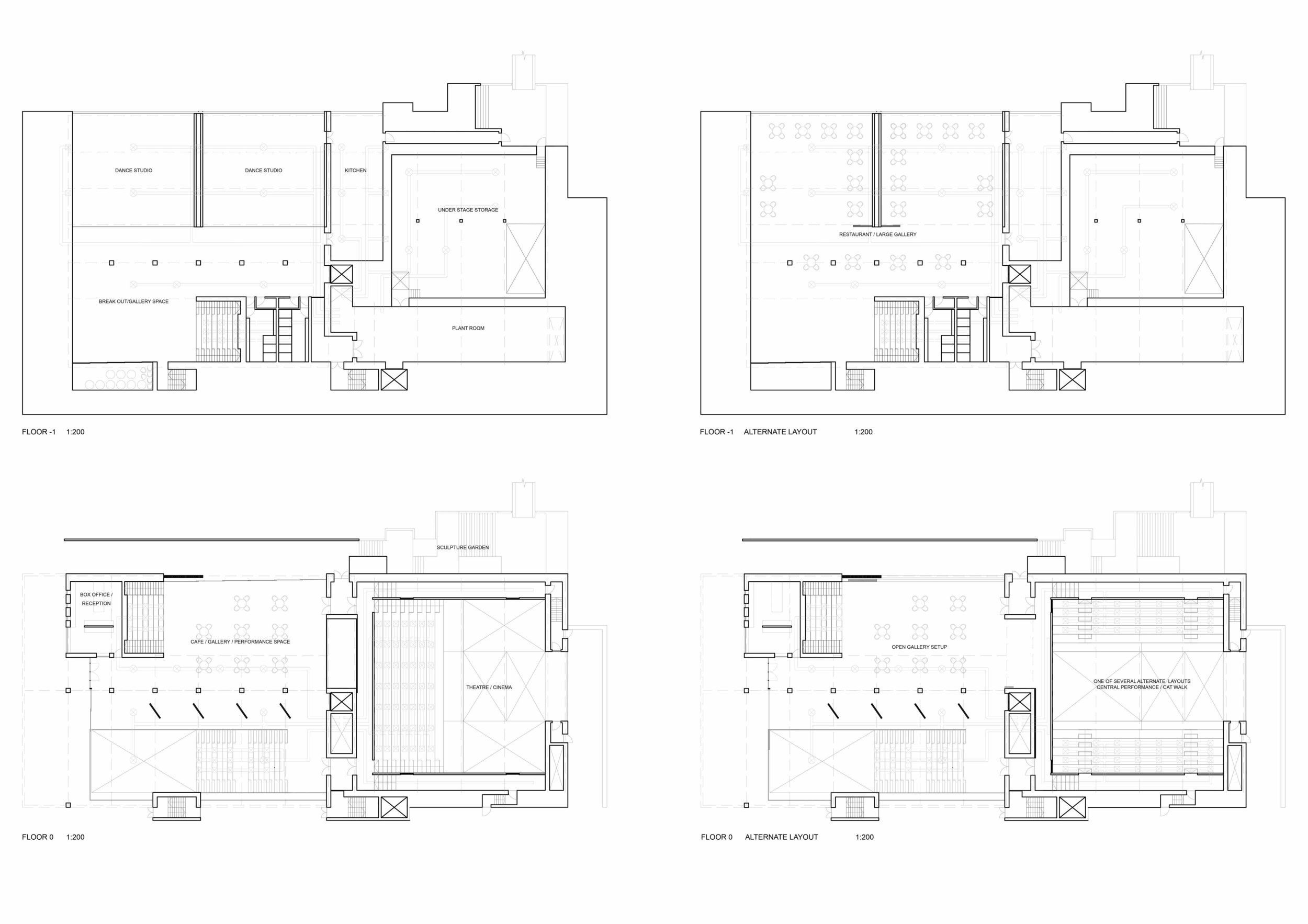 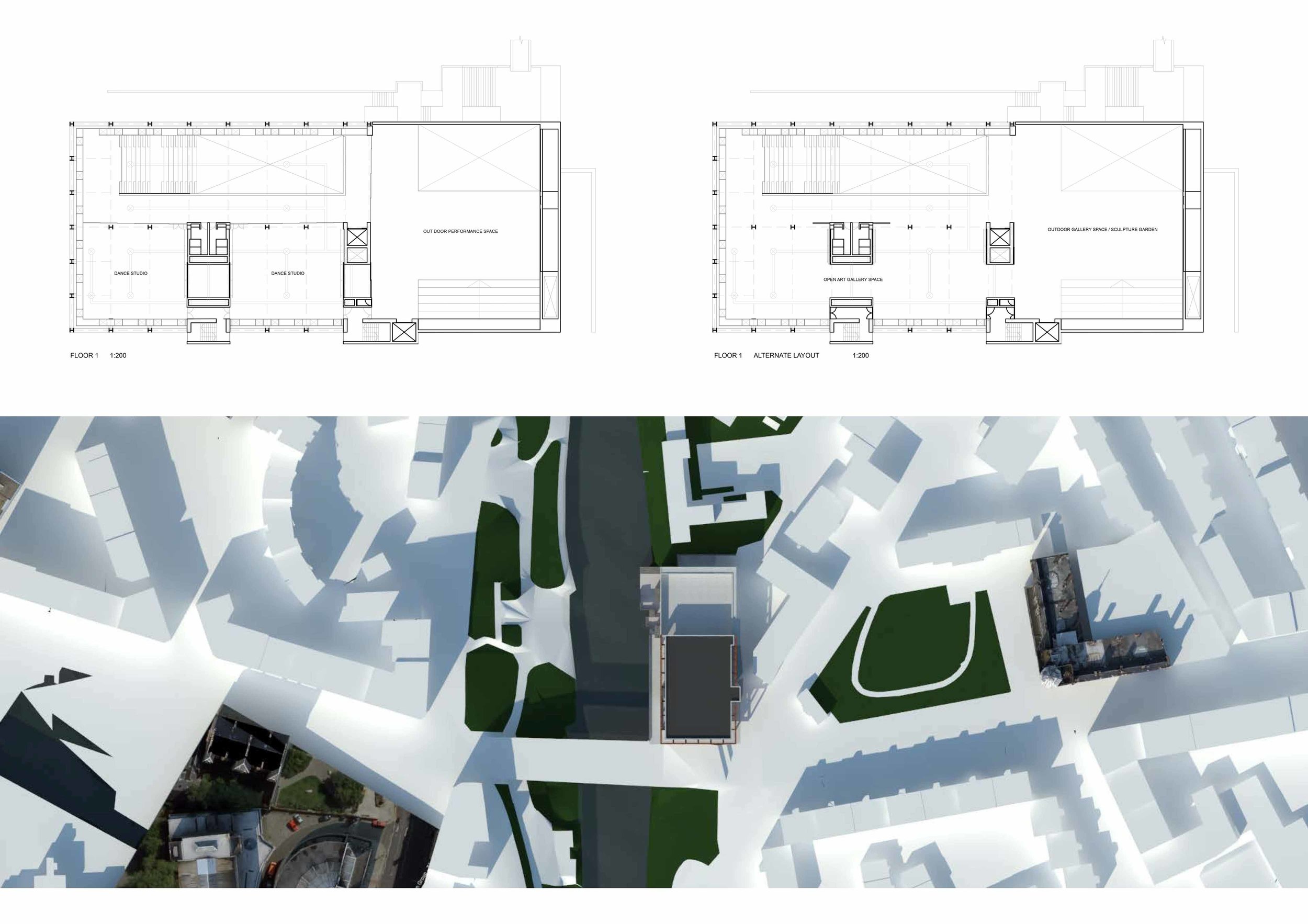 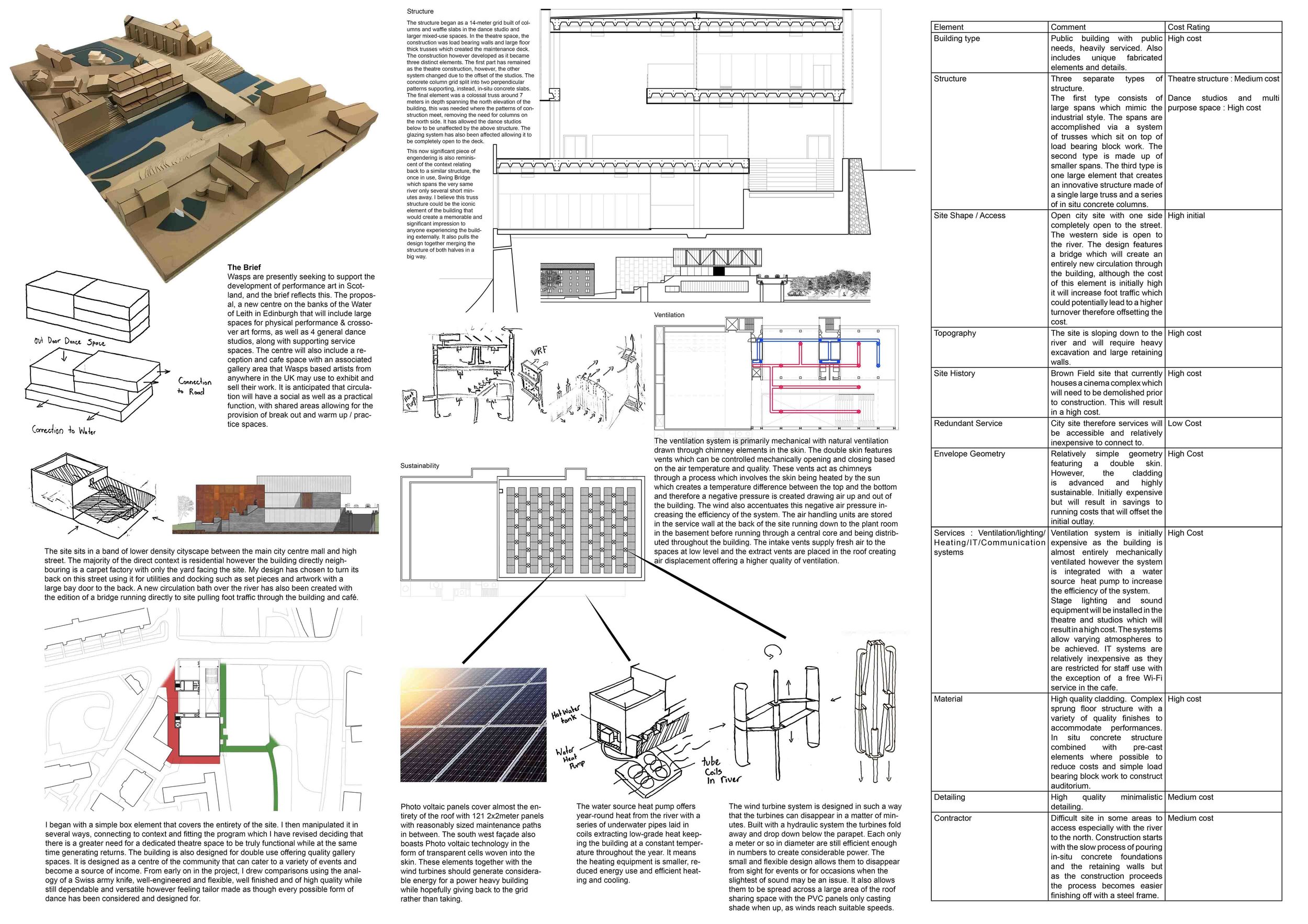 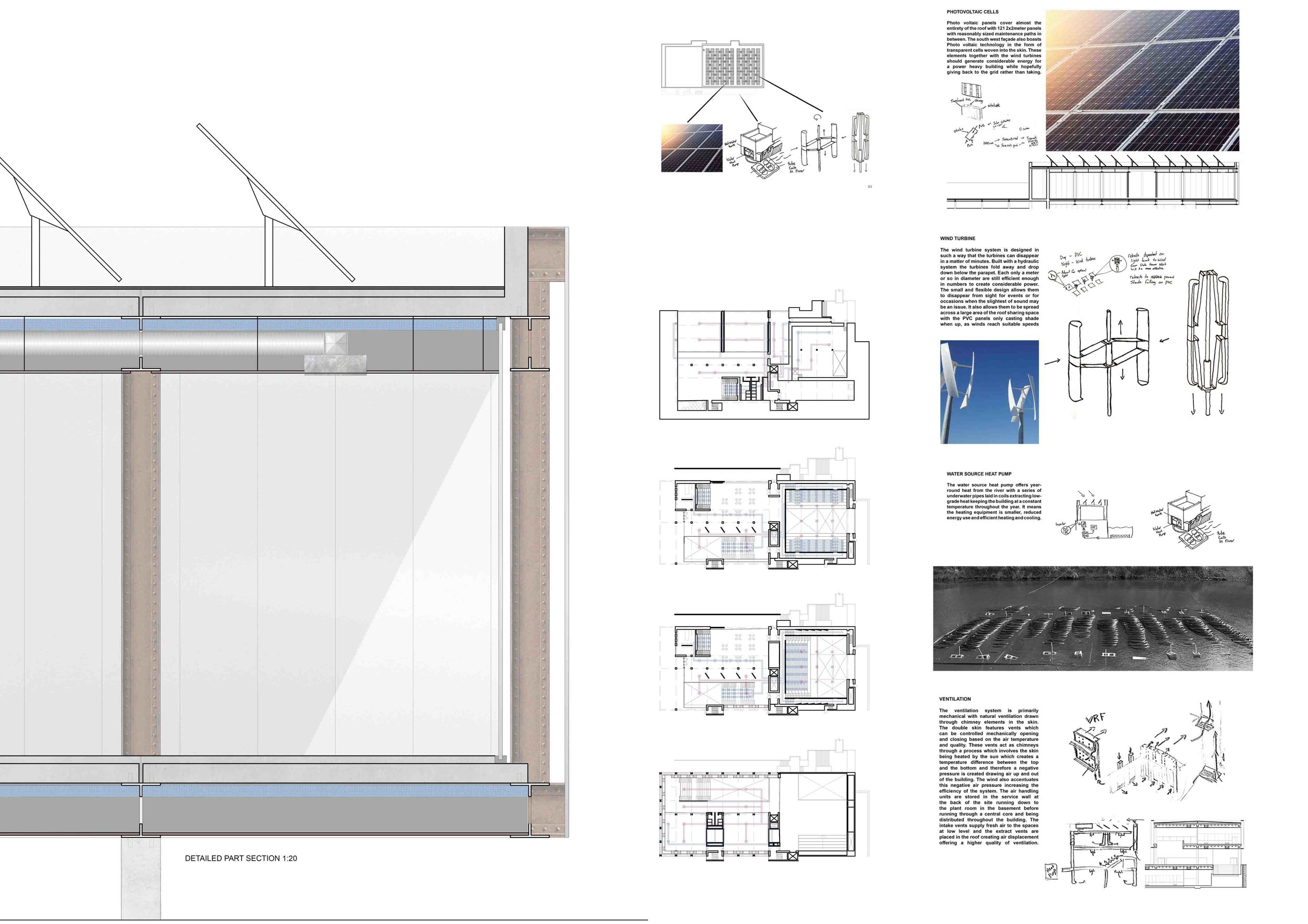 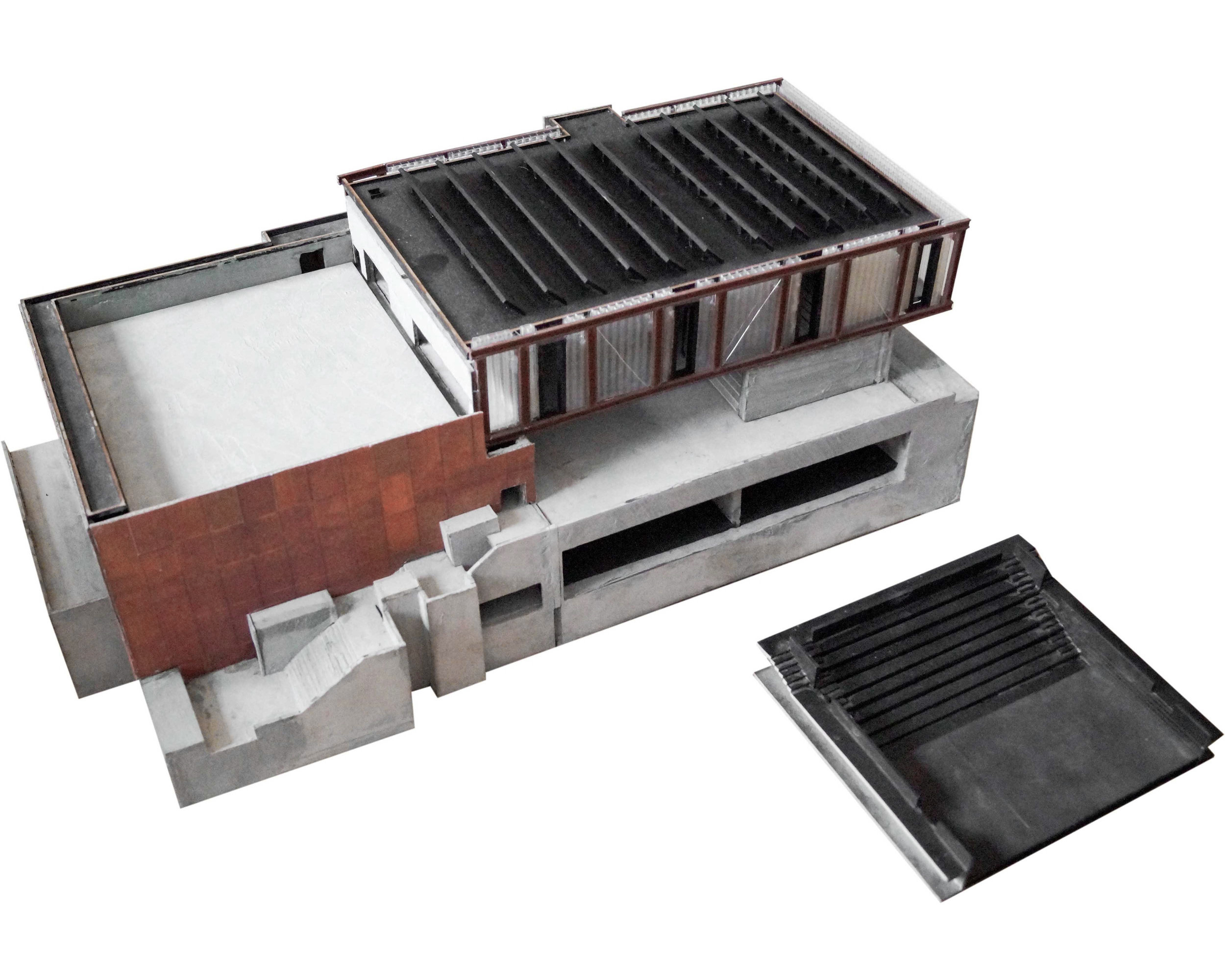 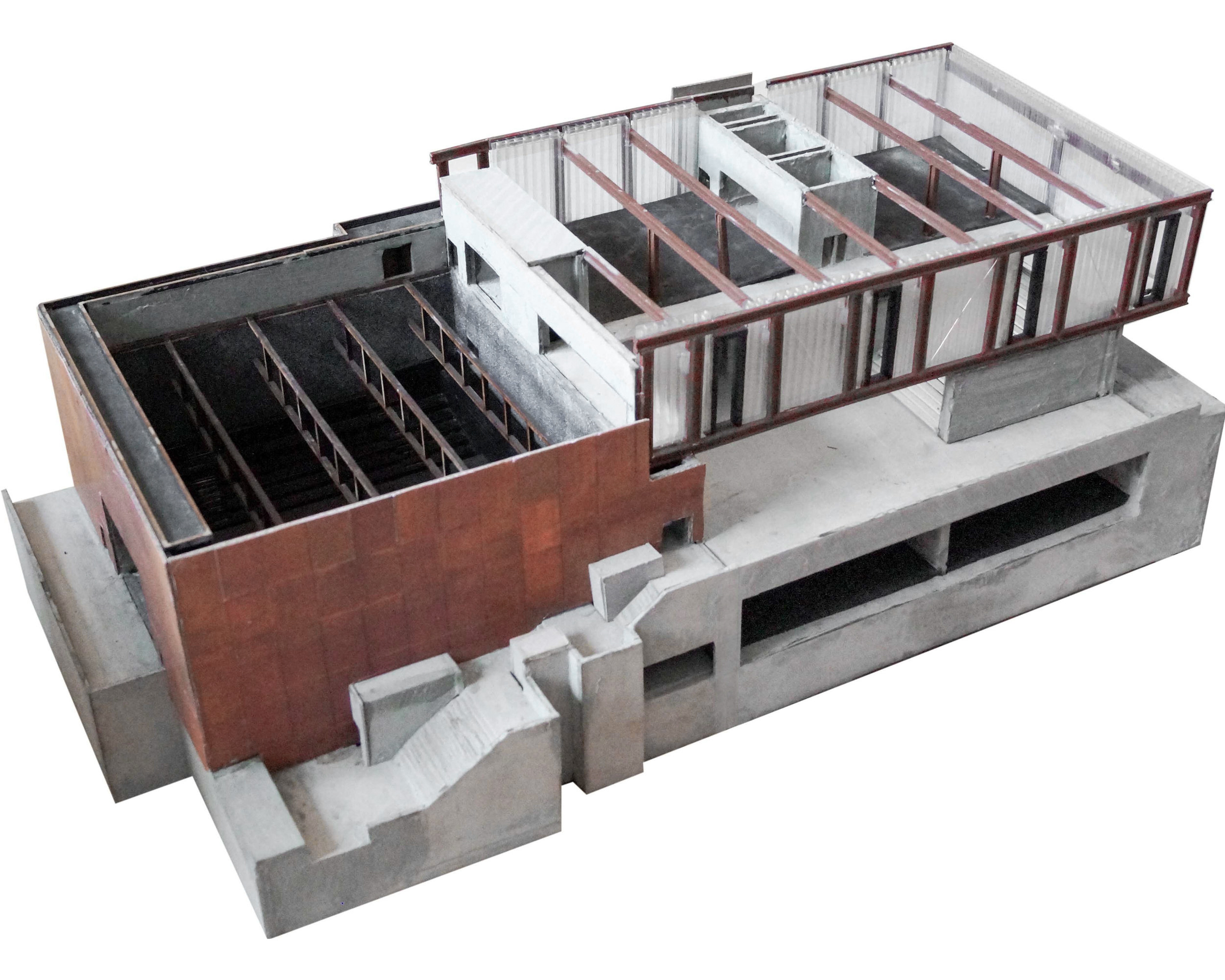 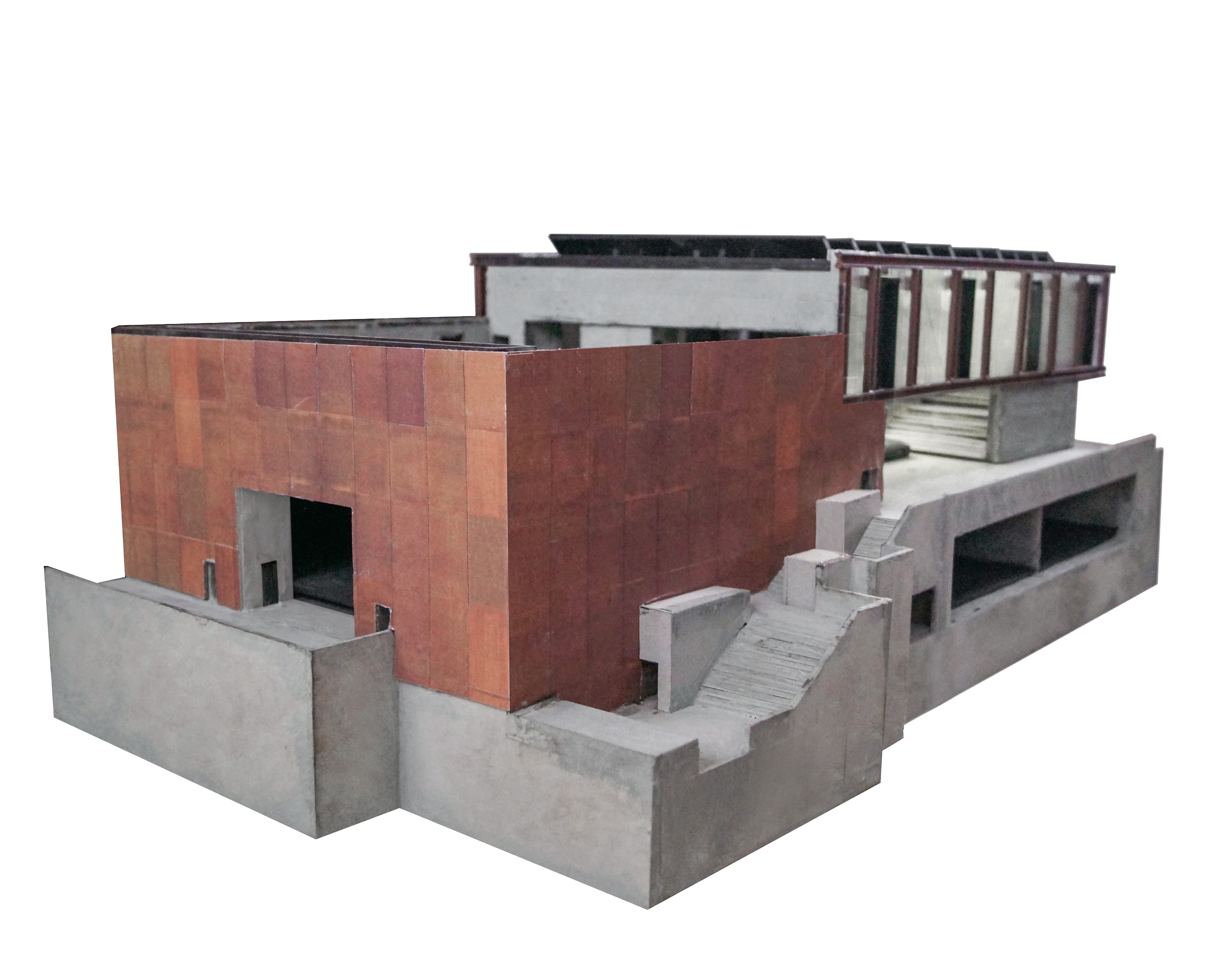 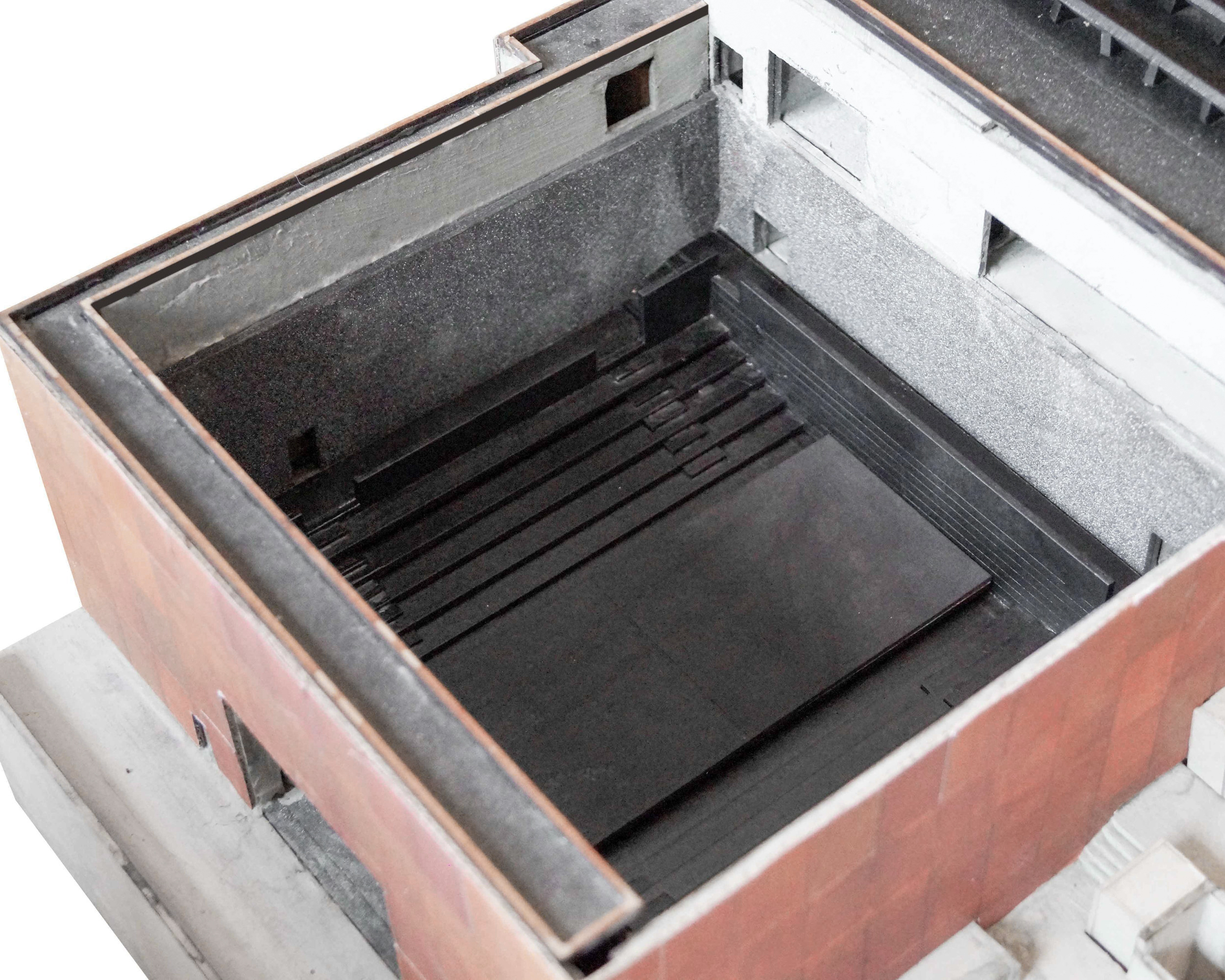 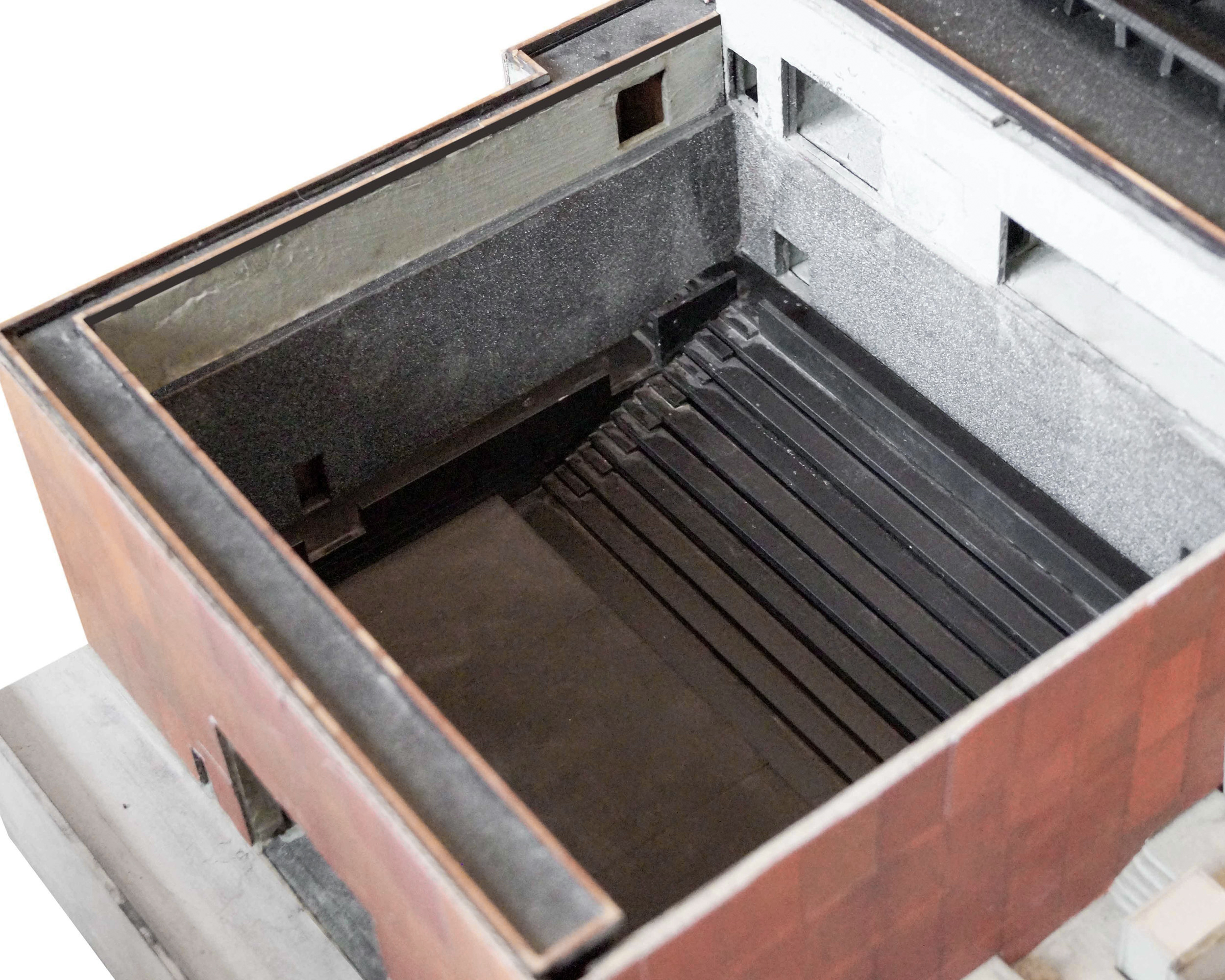 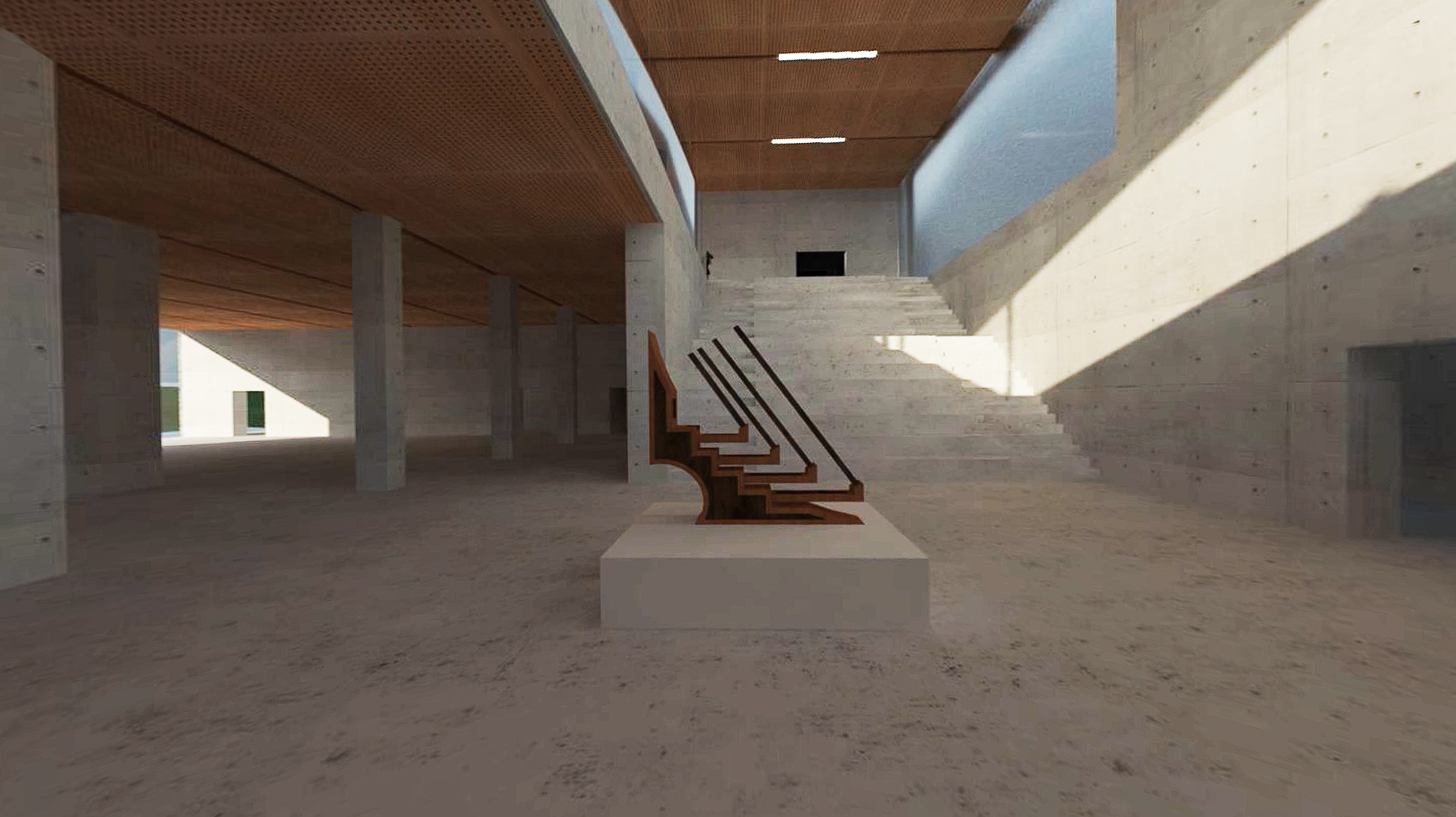 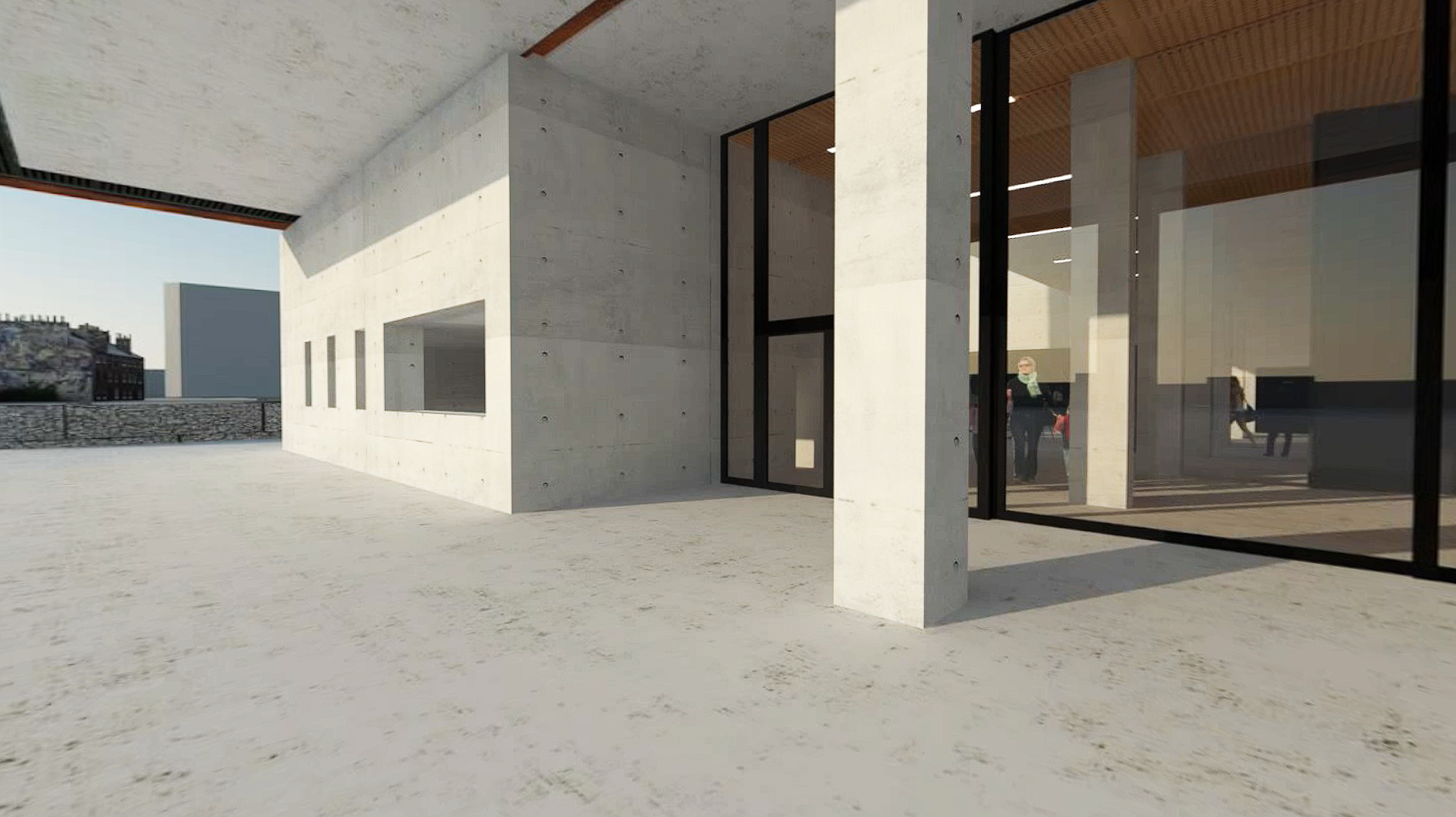 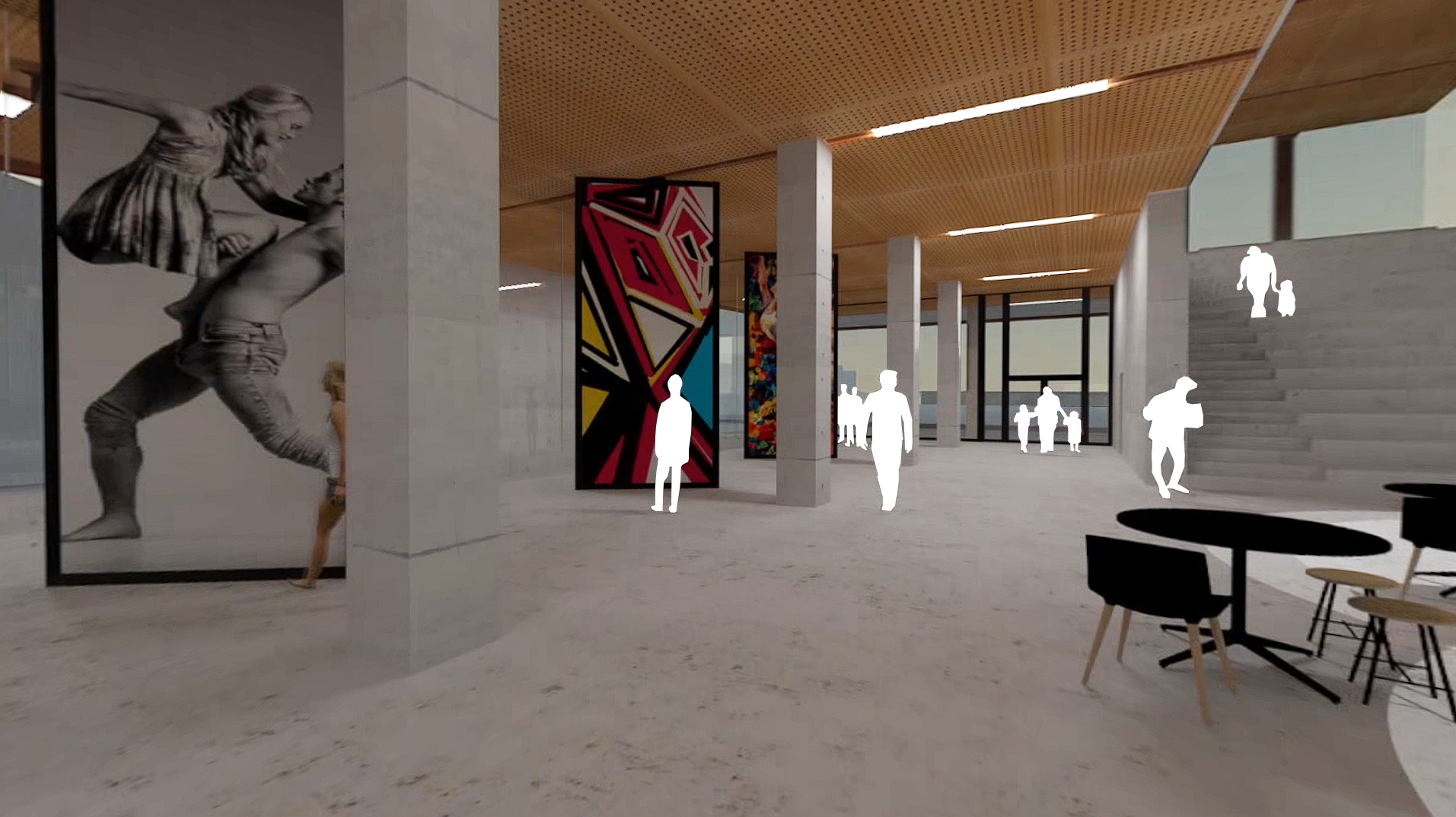 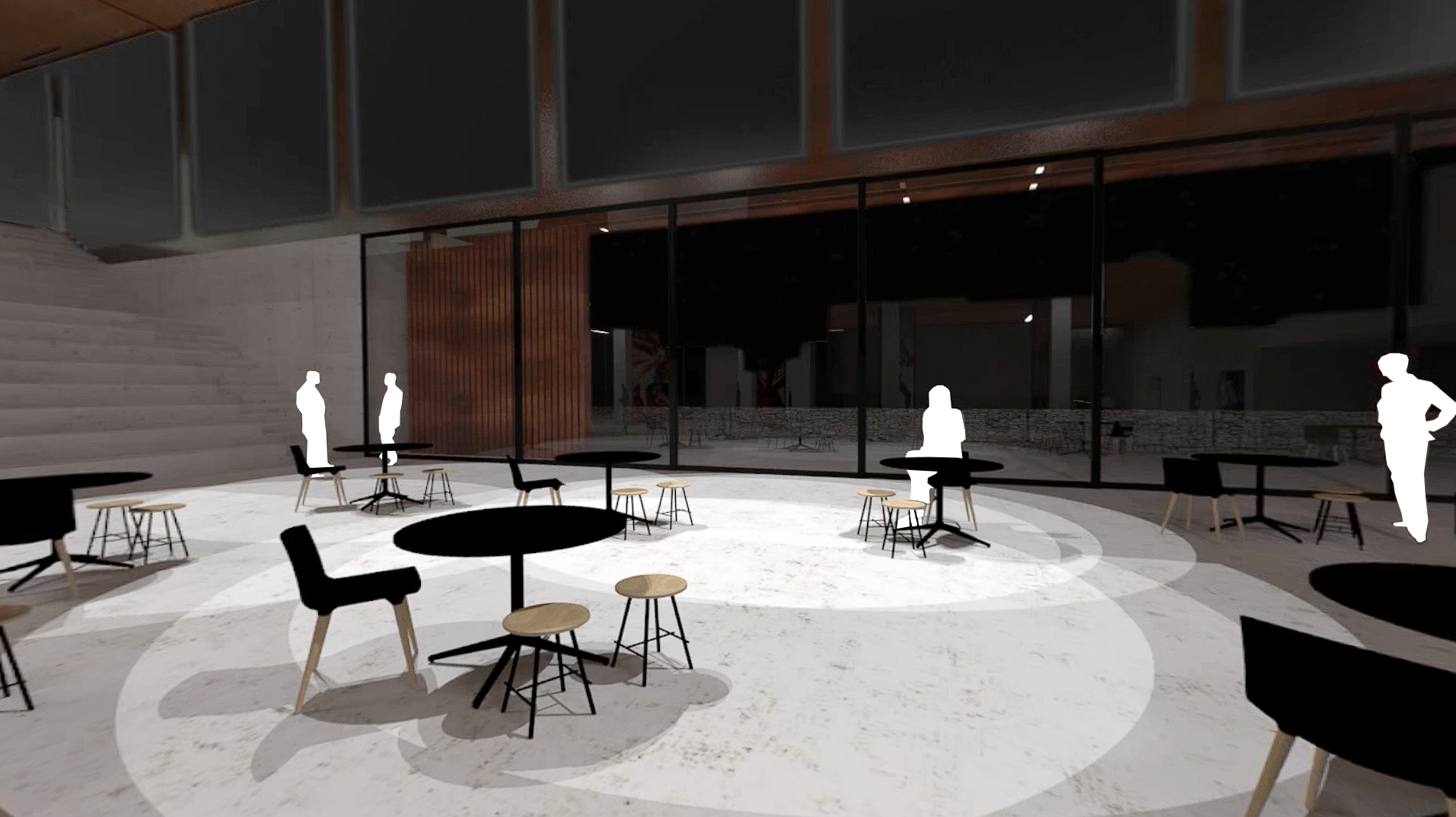